From a new coworking space in Marsiling to the reopening of Woodlands Galaxy CC Observatory, the North of Singapore is poppin’. Now there’s yet another cool new addition to this part of town. We’re talking about Bukit Canberra, a 12-hectare integrated hub that has been soft-launched to the public.

Bukit Canberra is opening in phases, but you can already start taking advantage of the facilities available while waiting for the rest to fully open up. When we visited during the opening weekend, there was a new indoor sports hall, an open lawn right in the heart of the hub, and a lush butterfly garden on the 2nd floor. Here’s a first look at what you can expect: 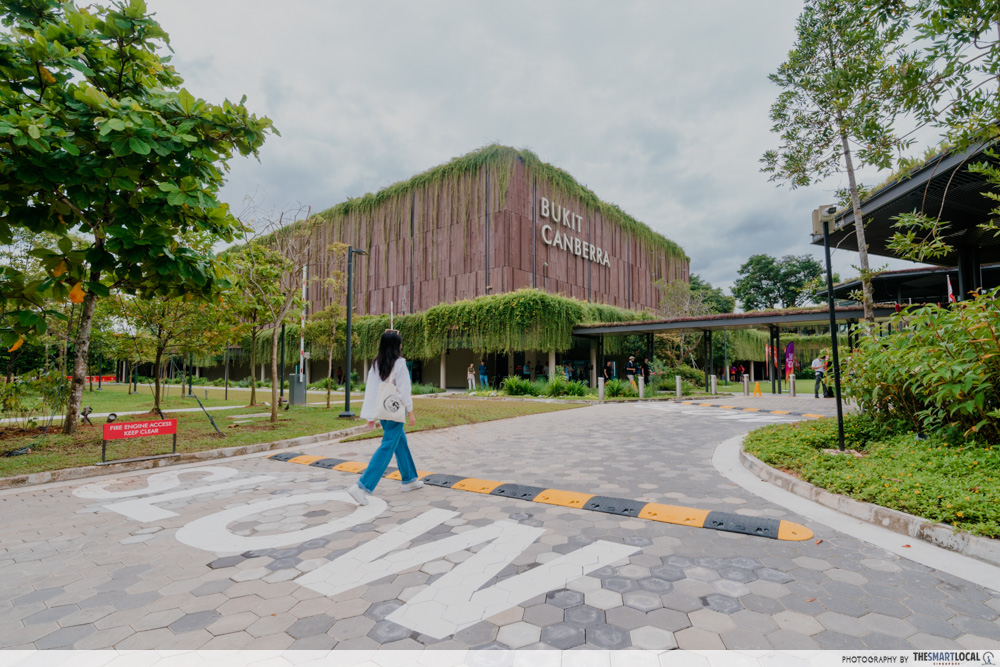 Health is wealth, they say – and aren’t we lucky to have various facilities around Singapore that make leading a healthy lifestyle a breeze?

With the opening of Bukit Canberra, Northies of all ages now have a new spot to get active and mingle with others in the community. The new Bukit Canberra Sports Hall has opened with 8 badminton courts, 4 basketball courts, 2 pickleball courts, and 8 tennis tables – all available for booking on ActiveSG. 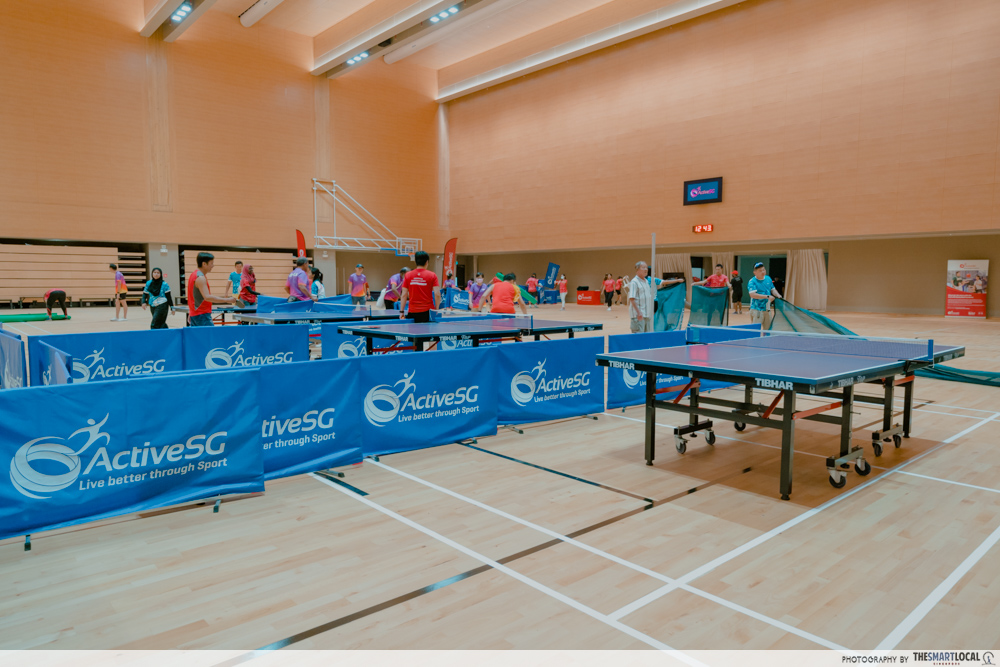 The multi-purpose hall can also be transformed into an events space or to host Zumba sessions, and there are pull-out audience seats for those who want to watch all the action. Those with youngins can also sign them up for Zumba Kidz, which costs $12 per session. 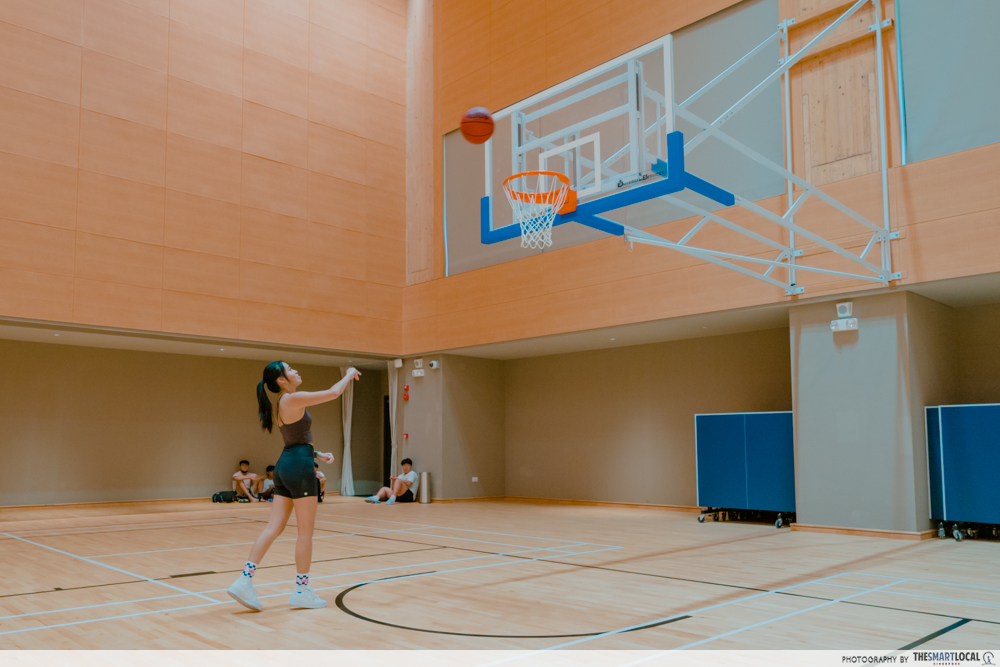 The sports hall is open from 7am-10pm daily, but we recommend you to chope your slots through the ActiveSG app in advance so you won’t make a wasted trip down. 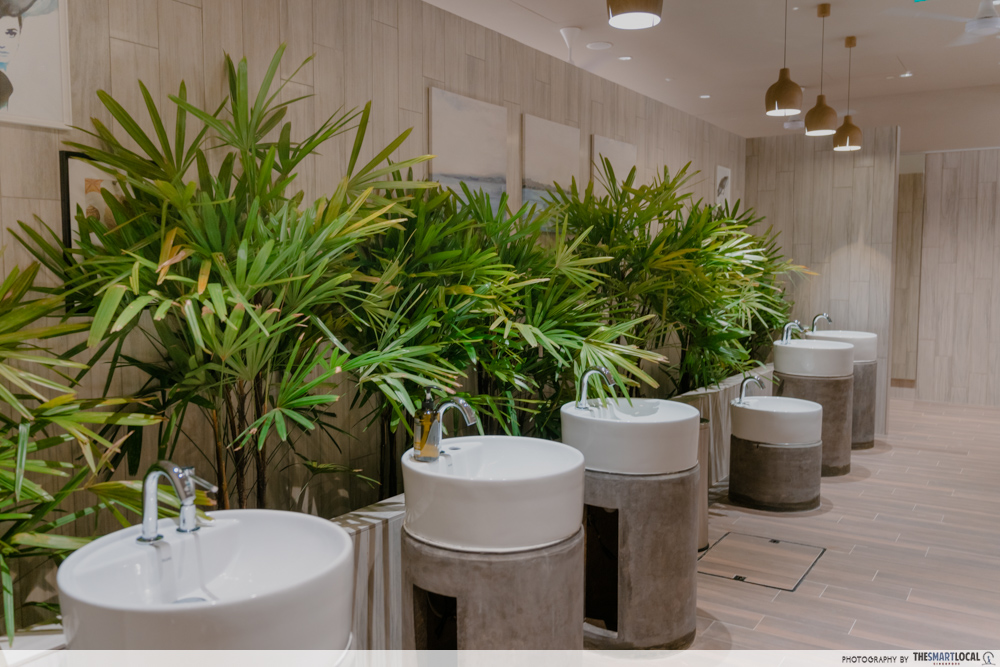 The “green theme” of Bukit Canberra has also been brought into the bathrooms.

If you want to freshen up before dinner, there are also chio resort-style bathrooms with shower facilities right outside the sports hall. Just remember to bring your towel and toiletries, as these won’t be provided.

Sometimes, we just want to escape for an hour or 2 for a wee bit of nature. That’s where community gardens, especially those in the heartlands, come in handy. The folks behind Bukit Canberra have shaped its landscaping around existing terrain, bringing even more nature to the Sembawang neighbourhood. 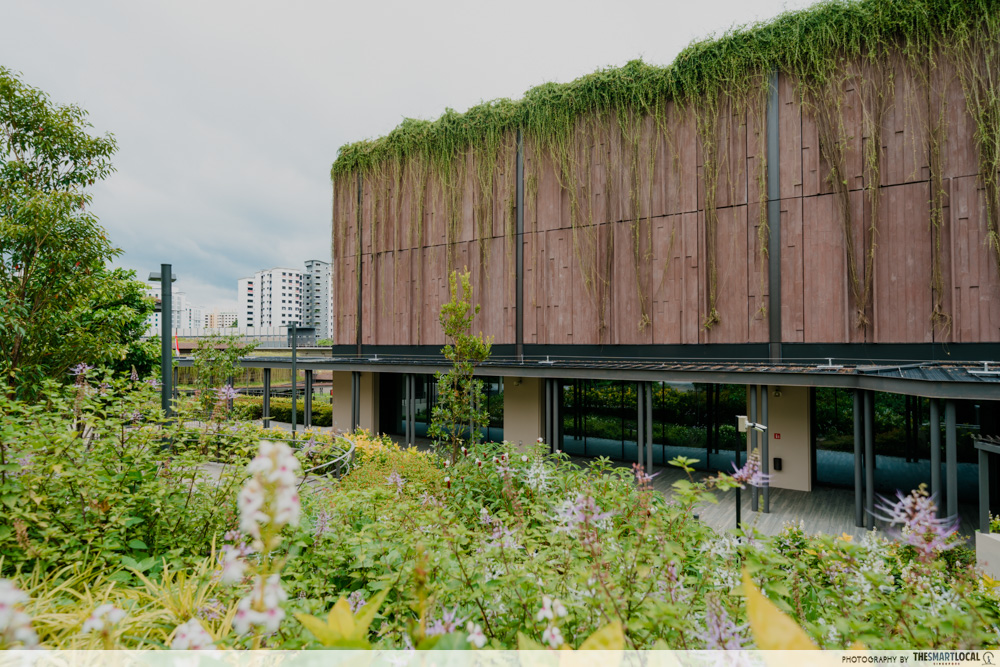 Once it’s fully open, you can expect various elements such as running trails throughout the hub, a Fruit Orchard and Food Forest where the community can grow their own plants, and a “therapeutic garden”. 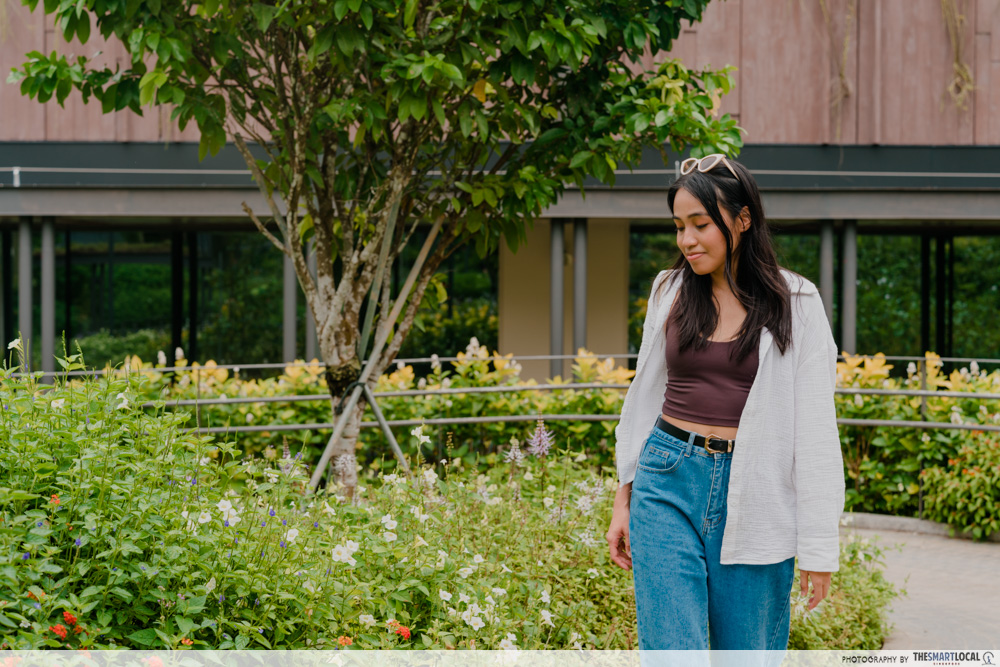 But for a preview of what’s to come, check out the Butterfly Garden, located on the 2nd floor. You’ll find various species of flora and fauna – and we even spotted some butterflies while we were there.

Cheeky tip: It’s an underrated place to take bae for a romantic stroll, especially if you live near Bukit Canberra. 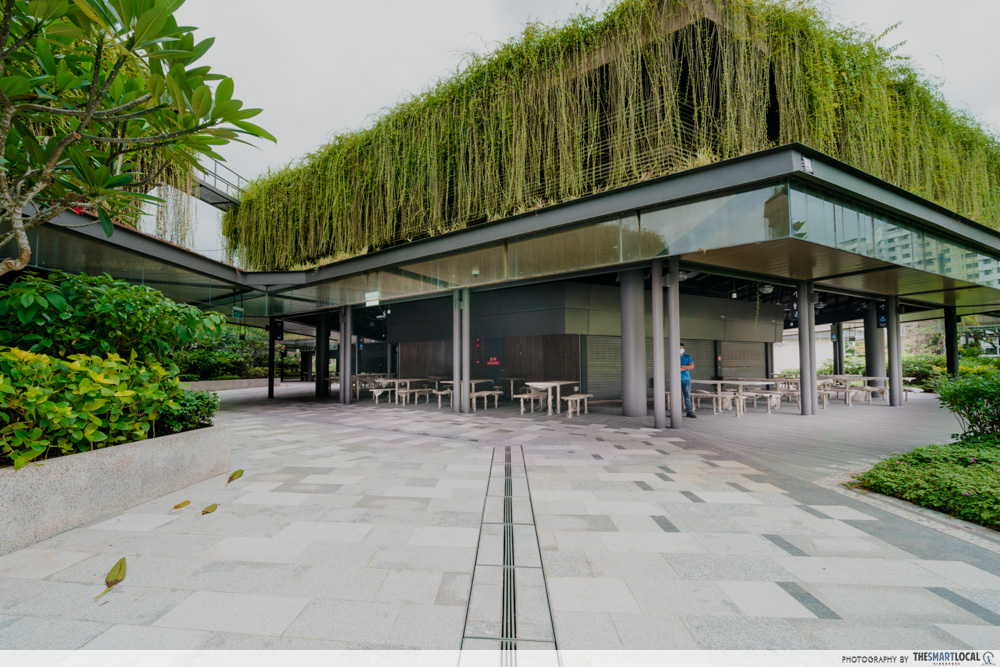 The hawker centre is super aesthetic.

We know what you’re wondering, “When will the rest open ah?”

Well, foodies will be thrilled to know that the 44-stall hawker centre is slated to open in the 2nd phase by the end of the year. As with the other parts of Bukit Canberra, the hawker centre will also be shrouded by greenery, with vines hanging from the rooftop. 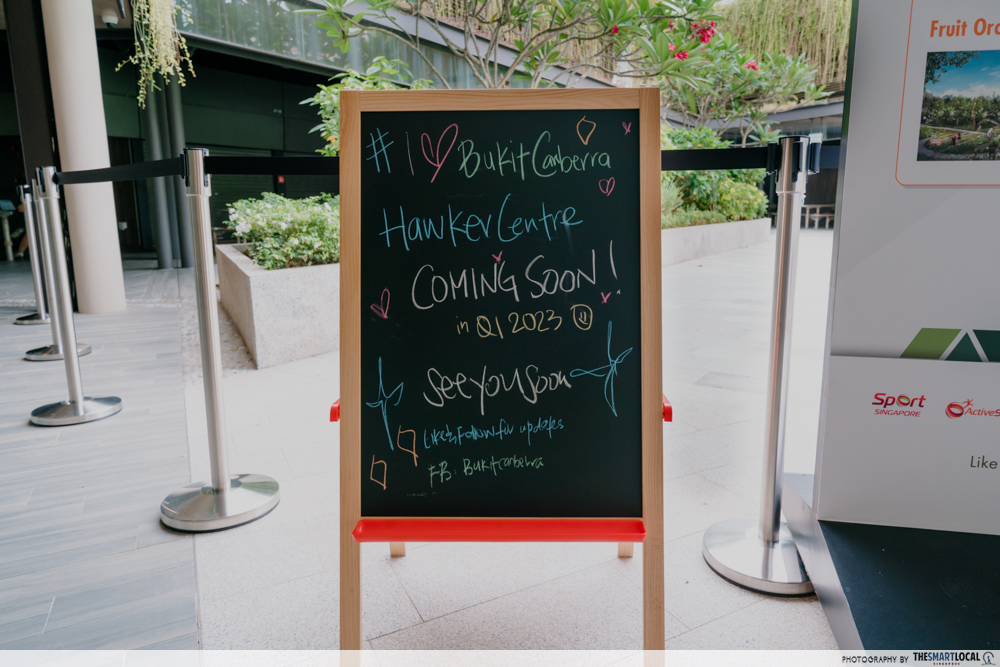 In 2023, you can also look forward to a myriad of exciting new facilities such as an Active Health Lab, ActiveSG gym, Bukit Canberra Polyclinic, a library that takes over the former Admiralty House, Bukit Canberra Swimming Complex 2, and even a Natural Setting Pool which mimics a natural lagoon. 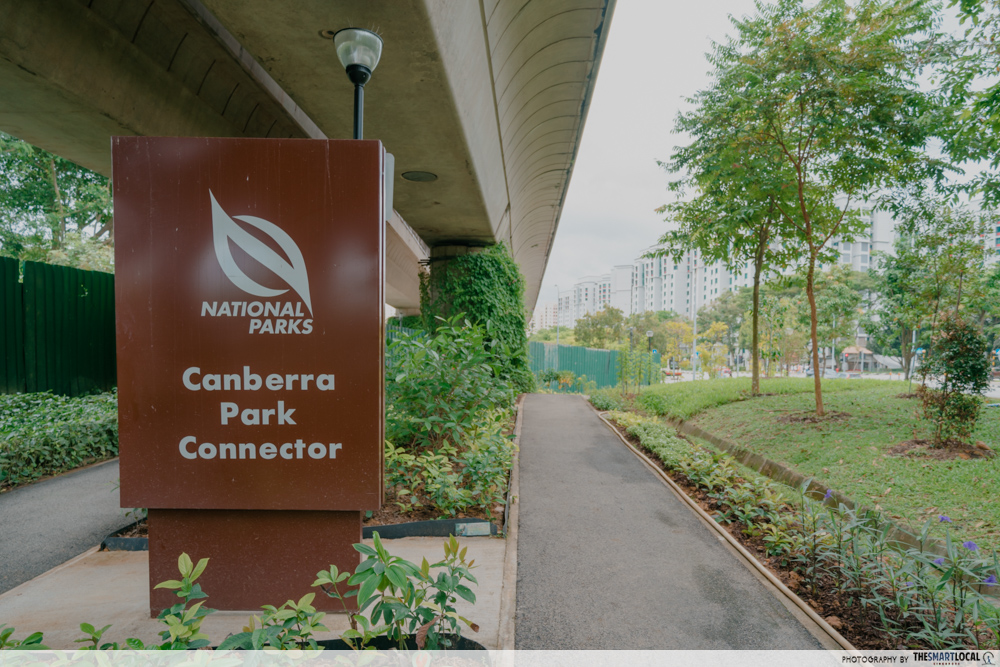 For those who love cycling, here’s good news: Bukit Canberra will also be connected via the Canberra Park Connector to the scenic Sembawang Park. So it’ll be easy to make plans to go for a jog or bicycle ride after your game of badminton.

Get active at Bukit Canberra 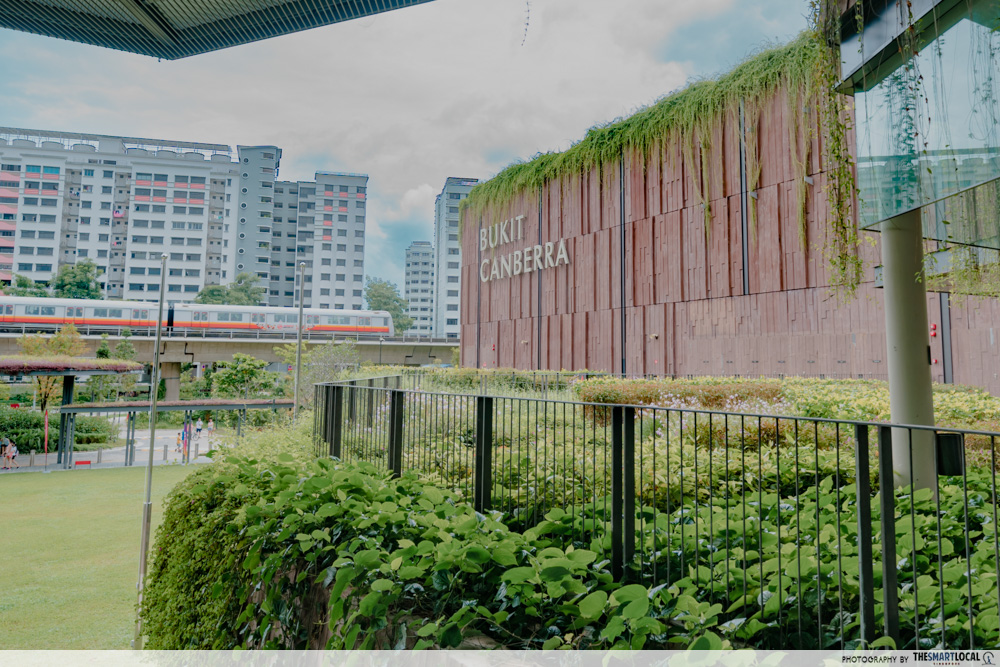 If you’re just as excited as us about the opening of Bukit Canberra, this is just the beginning. And now that there are 11 new stations that have opened as part of the Thomson-East Coast Line, this integrated sports hub is even more accessible to those living in other parts of Singapore.

The easiest way to get there is by taking the train to Sembawang MRT station – Bukit Canberra is a 7-minute walk away.

Find out more about Bukit Canberra

More things to do in the North: