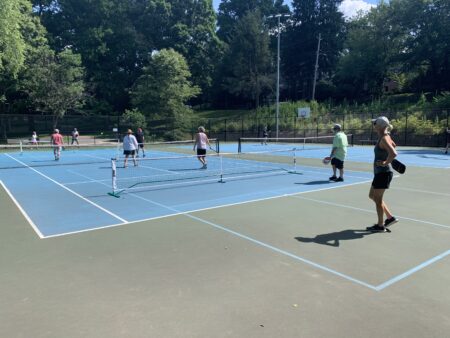 “After months of discussions with both local pickleball and tennis representatives – as well as recording comments from other players in the community – we have developed an equitable short-term solution to the exceptional local growth of both sports,” according to D. Tyrell McGirt, APR Director. “By adding dual lines to all of Asheville’s existing public tennis courts and instituting a structured play schedule, we’re following the lead of other recreation professionals in communities across the nation to support both popular racquet sports and minimize user conflict. We’re not removing tennis courts and the total number of lined pickleball courts will nearly double in a matter of weeks.”

Addition of dual lines, also known as shared lines or blended stripes, is expected to begin in early 2023 and take 4-6 weeks based on contractor availability. When complete, tennis court dimensions will remain white and pickleball court dimensions will be light blue. Two pickleball courts and one tennis court can fit within each multipurpose court. Existing tennis nets and posts will remain at all courts. Pickleball players will still need to set up their own portable nets, but APR expects to add semi permanent pickleball nets at some locations and/or pilot a system in which nets can be checked out in the near future.

Following this update, APR will institute an alternating shared use schedule with dedicated times for each sport. Wayne Simmons, APR Program and Operations Manager for Athletics and Recreation, shared a draft of the proposed schedule with pickleball and tennis players at a meeting on November 9 with plans for a final schedule to be posted at courts and online at least four weeks before it will go into effect.

Aston Park Tennis Center’s courts are available from April 1-November 30 with season passes for Asheville residents ranging from $299 for an individual to $599 for a family. Coupled with the 11 hard surface courts, Asheville community members will maintain access to 23 free or low-cost public tennis courts.

Established in 1956, Asheville Parks & Recreation manages a unique collection of more than 65 public parks, playgrounds, and open spaces throughout the city in a system that also includes full-complex recreation centers, swimming pools, Riverside Cemetery, sports fields and courts, and community centers that offer a variety of wellness-, education-, and culture-related programs for Ashevillians of all ages. With 10 miles of paved greenways and numerous natural surface trails, its complete portfolio acts as the foundation of a vibrant hub for the people of Asheville to connect with their neighbors and explore the natural beauty of a livable and walkable city.

Driven by the promise that Asheville is a better and safer place when everyone from infants to retirees has the opportunity to be supported, healthy, and successful, Asheville Parks & Recreation was the first nationally-accredited municipal recreation department in the United States. For the latest updates, follow the department on Facebook @aprca and Instagram @ashevilleparksandrecreation or visit  www.ashevillenc.gov/parks.