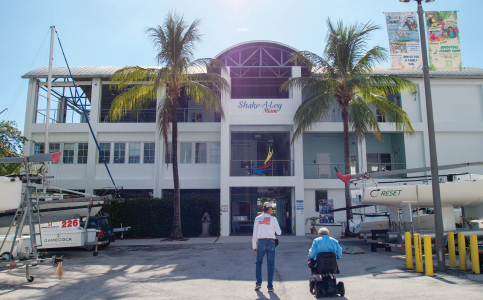 Shake-A-Leg Miami, a non-profit striving to give disabled and disadvantaged communities access to adaptable water sports, renewed its license with the City of Miami and will stay afloat at its prime bayfront location in Coconut Grove.

Shake-A-Leg’s license agreement for use of city-owned waterfront at 2620 S Bayshore Drive was to expire 30 years after the non-profit found a home on breezy Biscayne Bay. The organization launched in 1990 to ensure disabled children and military veterans can enjoy one of Miami’s most valuable natural resources, the water. City commissioners unanimously voted Nov. 17 to extend Shake-A-Leg’s license for 25 more years.

“It’s because of our partnership we provide access to those who don’t have access. We believe there are healing properties in the water, and we look forward to working with you all to ensure we can continue this for many more years to come,” said Harry Horgan, founder of Shake-A-Leg, during the public comment period at the commission meeting.

The city determined renewing the lease was in the city’s and the greater community’s best interest since Shake-A-Leg has occupied and operated on the property since 1990 and has significant experience in providing recreation services to underserved communities.

For three decades, Shake-A-Leg has served disabled youth and adults through summer camps and year-round programs that encourage outdoor fun with a range of adaptable equipment including kayaks, paddleboards and boats.

“Anything you can envision on the water, we’re doing in an adaptive setting”, said Karis Starke, program manager at Shake-A-Leg.

The fleet features ten 20-foot sailboats, two larger sailboats for cruising, a 40-foot Corinthian catamaran, and more. All are outfitted with adaptable equipment, like secure seating and bows that drop down to the water, so people of all abilities can comfortably enjoy their time on the water.

Mr. Horgan said he hopes the tales of Hemingway and catching the big fish will inspire veterans and their families to participate.

Starting with just a few trailers in a parking lot, Shake-A-Leg has worked over the years with the city and a host of community partners to build a marina, acquire a fleet of watercraft, and upgrade facilities to expand and improve access for all.
“In the past year, we took out 8,000 people on the water,” Mr. Horgan said.

In addition to recreational activities, Shake-A-Leg offers educational opportunities and technical training where disabled students work with volunteers to learn how to build and restore boats of all sizes, from tabletop models to fully functional marine vessels. The models include historically significant military watercraft, like the PT-1 and Aircraft Rescue Boats, originally built in Miami for use in World War II.

Looking forward to the next 25 years, Shake-A-Leg says it will continue concerted effort to remove obstacles that prevent disabled and disadvantaged communities from getting out on the water. Mr. Horgan said the organization plans to upgrade facilities, expand educational and outreach programs, and embrace green initiatives to switch from fossil fuels to alternative energy. As part of the eco-conscious vision, trained students and volunteers are to replace old gas-powered boat engines with new electric models.

Shake-A-Leg plans a 90th birthday party for the US Coast Guard hangar on the bayfront where the vocational training takes place. The hangar, built in 1932, played a crucial role in protecting boaters and Florida’s coast throughout World War II and the Cuban refugee boatlift in the ’60s. In 2002, the Coast Guard Air Station at Dinner Key was placed on the National Register of Historic Places.

“We’re continuing the tradition of opening up the water to be safe to people with disabilities, families, and the whole community,” said Mr. Horgan. The public is invited to the 90th birthday from 10 a.m. to 2 p.m. Saturday, Dec. 10, to enjoy boat rides, kayaking, sailing, food and music.

The vote by the city commission also allocated funds for needed improvements to the baywalk and docks from which the non-profit launches its watercraft. In May, the commission authorized the city manager to seek $1,288,710 in reimbursement grant funding from the Florida Inland Navigation District, FIND, Waterways Assistance Program to construct an expanded baywalk and dockage at the site. The award required the non-profit to match the funds, and the city ultimately accepted its contribution of $1,021,178.

Mr. Horgan said the organization is completing the permit process for the docks. Construction on the baywalk is underway, with an expected completion within a couple of months.