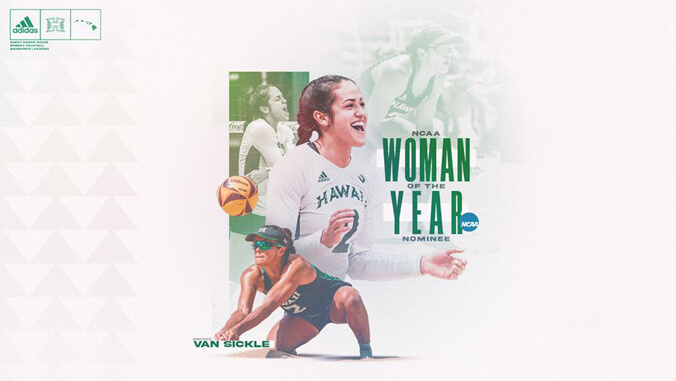 University of Hawaiʻi at Mānoa indoor and beach volleyball standout Brooke Van Sickle was announced as one of two Big West Conference nominees for the 2021–22 NCAA Woman of the Year award. Van Sickle is one of 151 conference-level nominees from across all three NCAA divisions vying for the national award. She and water polo athlete Ciara Franke from the University of California San Diego were selected from the Big West Conference (BWC) member schools to represent the conference.

In the spring, Van Sickle, a native of Battle Ground, Washington, helped UH advance to its fifth NCAA Tournament appearance in her third season with the BeachBows. The duo of Van Sickle and Glagau finished the season at 30–10 (.750) overall, becoming just the sixth UH pair to win 30 matches in a season.

Van Sickle graduated in spring 2021 with a bachelor’s degree in economics, and is currently pursuing her master’s degree in marketing. This past fall, she earned College Sports Information Directors of America Academic All-District honors for indoor volleyball.

NCAA member schools nominated 577 women for this year’s Woman of the Year award. Conference offices then reviewed all the nominees from their member schools. The Big West selected Van Sickle as a nominee because of her outstanding achievements during her collegiate career.

The NCAA Women of the Year Selection Committee will choose the top 10 honorees in each of the three divisions in October. From those 30 candidates, the committee will narrow it down to nine finalists and announce the 2022 Woman of the Year during a ceremony at the NCAA Convention in January 2023.