With The World Games 2022 just days away, some of the female pilots who will be competing took a moment to share their story with us… Jeannie Bartholemew (USA) and Robin Jandle (USA) are both canopy pilots, and Ting Yu (TPE) and Ryan Lindsay Lessard (USA) are competing the drone racing. Although these two air sports are very different, the pride, passion and sense of sisterhood involved are felt by pilots from both disciplines.

Both Ting Yu (known as Stephanie) and Ryan Lindsay Lessard are thrilled, although somewhat surprised, to be representing their countries at this international level of drone racing after starting out as hobbyists.

Lessard started drone racing just four years ago: “When I first started drone racing I would never have guessed that I’d be competing on the world stage. I have sacrificed a lot pursuing my dreams in this hobby. Being a full-time elementary school teacher doesn’t allow for much spare time, but it’s all worth it.”

Yu is similarly astonished by her rise to success: “Honestly, I’d never imagined myself being able to represent Chinese Taipei in drone racing, something that started out as a hobby for me. I’ve played competitive sports in the past, so it feels very natural for me to work towards a goal, and push myself to improve in a way. I think drone racing fulfills that competitiveness in me.” 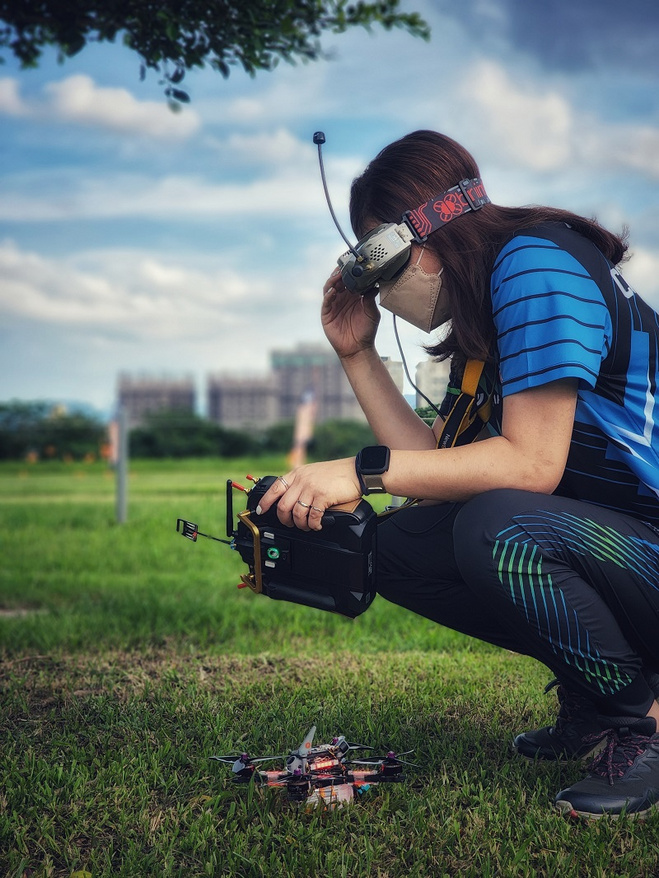 Ting Yu, known as Stephanie, is a drone racing pilot representing TPE at The World Games 2022

It is the first time the drone racing has been featured as an air sport in The World Games, which is an exciting moment for all the pilots involved. The racing in the FAI F9U category will feature mixed men and women with a single classification for individuals. All 32 pilots (12 female) will participate in the elimination stage which is followed by a double elimination optional sequence.

Canopy pilot Robin Jandle has many more years of experience in what is a more established sport at The World Games. Featured since the 2005 edition in Gemany, canopy piloting is scored for speed, accuracy, distance and freestyle.

Jandle who has been flying for 12 years and is from Hawaii and representing the USA in 2022, says:  “I am grateful for my family and friends who have cheered me on throughout the years. It’s taken a bit of sacrifice from leaving Hawaii to make it here, but I am happy to stay the course and keeping pushing myself towards my future goals within the sport. It truly is an honour to be a female representing air sports for the United States.”

The female competitors from both sports acknowledge that being a woman in a predominantly male sport can be a challenge, but appreciate the sense of sisterhood between fellow female athletes. Not only is there a mutual support, but also a sense of pride and duty to showcase their sport to other women.

Yu notes that, “female pilots are still the minority in drone racing, but I’ve always felt because of that, we’ve been very supportive of one another.” Likewise, Robin Jandle comments that “There are very few females in this category, so it’s important to educate and support others along the way.”

Lessard also points out her sense of duty to share her sport with other females: “There’s great responsibility in representing women in FPV on the world stage. If you go to a local race or even watch drone racing on tv, you typically won’t see women represented. At the World Games, there will be 12 of us competing. We’ll show other women and young girls that drone racing isn’t just for men. They’ll see themselves represented and will hopefully want to pick up the transmitter and learn to fly.”

Canopy Pilot, Jeannie Bartholemew is dedicating her flights to another female pilot who is unable to attend: “The World Games is one of my favourite competitions and I will be performing one of my swoop sister’s favourite moves, the Tick Jockey, in her honour. I can’t wait to show the world what canopy piloting is all about.”

Jeannie Bartholemew is representing USA at The World Games 2022

Showcasing air sports to a younger generation comes naturally to Lessard, as a teacher: “My 4th graders love that I fly drones and are so excited that I’ll be competing at The World Games. My students watch me set goals, overcome challenges, and celebrate success from hard work. It’s great that I can model these qualities in both academics and real life.”

Yu notes that it is easier to start in drone racing as the sport becomes more established: “It can be pretty daunting to get up your first FPV drone in the air (regardless of gender!), but I feel that compared to when I first started out, there are a lot more resources online, a bigger community to seek advice and support from, and more female representation now. I think drone racing is great for females interested in both the technical aspects of building the drone and racing it, and it’s much easier to start out learning to fly thanks to simulators.”

For all these pilots, the opportunity to share the excitement of their incredible skills is not to be missed, and The World Games represents a huge moment in both canopy piloting and drone racing.

Watch this space for stories and pictures from TWG2022!